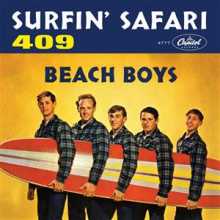 So you love surfing. That’s a given, right? Who wouldn’t want to feel the rush of the wave, the wind through their hair, and the challenge of surfing in all kinds of situations and locations? Surfing is more than a hobby to many, and it’s something to be celebrated. With the west coast attracting surfers and musicians alike, it’s no wonder that many songs have been written about this spectacular sport. Here are some of the best surfing songs to put on your playlist next time you’re driving to the shore.
“Surfin’ U.S.A.” by the Beach Boys is pretty enduring and fun. It’s hard to resist singing along to the tune so you may only want to play it around people you’re comfortable with hearing your loudest singing voice. Other Beach Boy songs that have to make the cut include “Surfin’ Safari,” “Surfer Girl,” “Lonely Sea,” “Catch A Wave,” “Noble Surfer," and “Surf Jam.”
“Wipe Out,” which is most famously performed by the Surfaris, has been inspiring surfers since its release in 1963. The ditty has been featured in dozens of movies and television shows since then, and “The Book of Rock Record Lists” has reported that ‘Wipe Out” is the number one surf rock song in the world.
“Surfer Dan” by the Turtles in another oldie that is just about right. “Surfin’ ‘Round The World” by Bruce Johnston is an anthem for many traveling surfers. Other songs that deserve a place on any playlist that celebrates surfing include “Surf City” by Jan & Dean, “Misirlou” by Dick Dale & the Del-Tones, and “Save Your Sundays for Surfin’” by the Fantastic Baggys.
< Previous post:


How to Learn to Surf on a Shortboard

Surfing central, from how to surf to where to surf to the latest surfing news

We Support
Climate Activism
Click to reach the League of Conservation Voters.
Conversation Processing Intelligence™ beta website!
Click here to visit the hub of the Klat Network.
This site is part of the Klat network of blogs, forums, and communities.

How to Learn to Surf on a Shortboard

The Boneless Ones: Skate Punk Gets All Metal and Junk

Chief: From Switzerland with Love